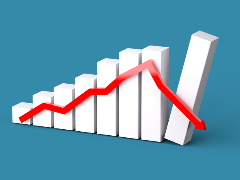 Quick Definition: A recession is a period of time in which a country’s economic activity declines causing unemployment to rise and incomes to fall.

What is a recession?

A recession is often defined as two successive quarters of falling GDP (gross domestic product). Although this definition is widely used, a recession can be more simply defined as a decline in economic activity in a country.

A recession is one of the four phases in the business cycle. It is caused by a fall in aggregate demand (the total demand in the economy from consumers, businesses and the government) and subsequently the economy will begin to decline. What this means is that the economy’s output (the total value of all goods and services produced, a.k.a GDP) will begin to fall. As a result of the fall in output, the economy will suffer from many repercussions which will be described in the following section.

What are the effects of it?

Posted in Theories and Basics | Comments Off on Recession Explained