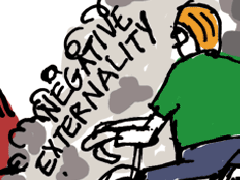 What is a market failure?

Market failures is an important subject in economics because they give arguments for government intervention in markets.

What are the different causes?

Externalities These are negative or positive consequences that are not accounted for in a market transaction. Examples of negative externalities are pollution or congestion.

Imperfect market This is a term that describes any market structure between the extremes of perfect competition and pure monopoly. Duopolies, oligopolies and monopolistic markets are all imperfectly competitive market structures.

Merit goods These are goods that bring wider benefits to society if they are consumed. They are generally under-supplied by the private sector so the government provides them as well. An example of a merit good is education.

Oligopoly – This is a market structure with a few very large firms which dominate the market and its output.

Public goods These are goods or services that are non-excludable (meaning you can’t prevent people from using it) and non-rival (meaning it doesn’t cost any more to supply an extra person) therefore they are provided by the government.

Posted in Theories and Basics | Comments Off on Market Failures Explained