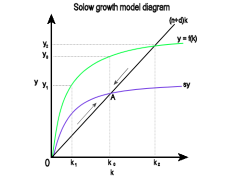 A Beginner’s Guide to the Solow Growth Model

What is the Solow growth model?

The Solow growth model is an extension of the Harrod-Domar Model. It states that there are three factors: technology, capital accumulation and labour force that drive economic growth.

What are the factors affecting economic growth?

The Solow growth model believes that a rise in capital accumulation and labour force will increase the economic growth rate, but only temporarily because of diminishing returns.

For example, imagine if an economy only has one worker. If you add one more worker, output will increase dramatically. But if the economy has thousands of workers, adding one more worker will not cause output to increase as much. Eventually, the economy will grow at a steady rate, with GDP growing at the same rate as the increase in labour force and productivity.

Once the steady-state is reached and the resources in a country are used up, the economic growth rate can only be increased through innovation and improvements in technology.

What are the implications of this model?

Factors of Production Explained
Advantages and Disadvantages of Minimum Wage